“The construction of the CFA represented public and private cooperation at an exceptional level. The CVUSD turned on the lights and the CVAF provided the magic. ~Erma Smith and Terry Liebowitz 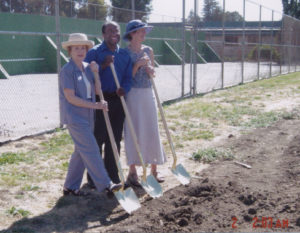 In 1998, several community members met with CVUSD administrators to explore the possibility of building a performing arts center on the Castro Valley High School campus.  All wholeheartedly agreed that Castro Valley had a history of outstanding student performers who deserved a stage upon which to shine.  With old-fashioned small town spirit, Erma Smith and Terry Liebowitz joined a substantial community effort to pass Bond Measure C which apportioned $7.1 million in funding for the design and construction of a state-of-the-art theater.  CVUSD, which owns and operates the Castro Valley Center for the Arts (CFA), contributed another $2 million dollars and dream of the performing arts center became a reality.

Early fundraising support from friends, neighbors and music parents began during construction, when Erma Smith and Terry Liebowitz produced  annual “Light the Lights” benefit concerts with renowned artists, Frederica von Stade, Beach Blanket Babylon diva Val Diamond, and Oakland East Bay Symphony Maestro Michael Morgan. They were joined by band and choral groups from Castro Valley middle and high schools.  Donations from these early fundraising events were gifted to the school district and were used to purchase sound and lighting equipment and landscaping.  Additionally, the CVAF collaborated with community businesses who donated musical equipment and furnishings for the Center. 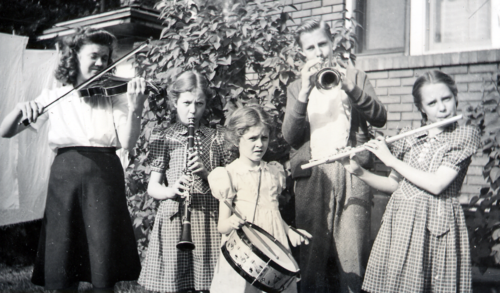 In 2005, the Castro Valley Arts Foundation incorporated as a non-profit 501 (c)(3) organization. They commissioned a detailed business plan and agreed to represent the community as an oversight and fundraising entity for the CFA.   A Memo of Understanding documented that a significant annual donation by CVAF would be used exclusively for Center operational expenses.

Recognizing that a commitment of this size would need a constant replenishment of donations, Erma Smith and her siblings established an endowment to support the arts.  Their generous offer to match every community dollar donated for a period of five years, resulted in the Castro Valley Arts Foundation Endowment Fund.

After eight years of planning, designing, and fundraising, the CFA opened in 2006 with a gala and the premiere production of The Music Man.  A collaboration of students, professionals and community members performed on stage, played in the pit and worked as technicians and crew.  Under the direction of the newly hired drama teacher/managing director, The Music Man was a huge hit, playing to sold out crowds for the entire nine show run.

The Castro Valley Arts Foundation remains a driving force behind the Center’s success, annually raising over $50,000 for CVUSD and donating more than 2,500 hours of volunteer time. The extraordinary donation from the Smith family and the amazing generosity of our Castro Valley community continue to be the light that guides and secures an outstanding future for the Center.